The Mystery of Fannin’s Watch

Investigate the mystery by rotating the image with your finger or mouse and zooming in with the magnifying glass button.

Back:
Given July 1819 to my Grandson James Walker (Fanin) Marion, Ga.

Listen to the Story of Colonel Fannin's Watch 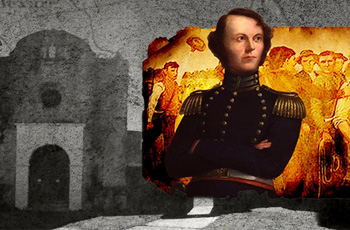 The Dallas Historical Society has in its collection the reputed watch of Col. James W. Fannin, Jr. How did it get there? Is it authentic? No one knows for sure, but the inscription on the back yields a clue.

In order to understand the significance of the watch—we need to understand the significance of the man who owned it: Col. James W. Fannin, Jr. The Georgian came to prominence in the Texas Revolution and is primarily known as the embattled commander of the Presidio de la Bahía at Goliad renamed Fort Defiance, and made famous by the Goliad Massacre. After his men had been slain and knowing he was to be executed, a severely wounded Fannin asked that his last personal item, a pocket watch, be given to his family, that he not be shot in the face, and that he receive a Christian burial. The commander of the firing squad took his watch, shot him in the face, and threw his body on a pile of corpses. His execution put a face on the massacre and with the last stand at the Alamo, generated a righteous anger that helped turn the tide of the Texas Revolution.

The next critical battle was at San Jacinto. It is possible that Col. William Houston Jack who fought as a private with Sam Houston found the watch. The inscription on the watch reads that Jack retrieved Fannin’s watch among the items taken from the Mexicans and returned it to Fannin’s family. Incidentally, Jack County, Texas, was named in honor of William Houston Jack and his brother Patrick.

You will also note that the name Fannin seems to be misspelled in both inscriptions. Since misspelling was common for the time, it could be that the original engraving was misspelled and the later inscription merely copied the misspelling. Or is it all a clever forgery, a practice not unknown in the world of collecting?

Nothing much is known about the watch until it was acquired by a Dallas collector who gifted it to the Dallas Historical Society where it rests today along with Fannin’s epaulettes and an original painting of him.