“To Adopt Such Efficient Measures”; The Archive War of 1842 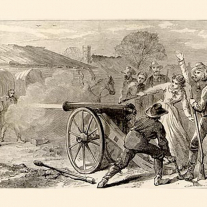 Did you know that Texans fought a war over the official archives of the Republic of Texas against… themselves?  Join us at Texas Independence Hall for a discussion of the infamous Archive War of 1842.  Learn about how the Mexican invasions of Texas led to a conflict which would involve Texas Rangers, drunken Austin-ites, and a VERY upset lady in 1842.  Contact Kevin Malcolm at kevin.malcolm@thc.texas.gov or 936-878-2214 ext. 224 for more information.