“Examine well and be very particular”; The Diary of Colonel William Fairfax Gray 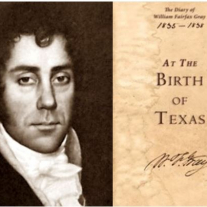 Take a close look at the Texas Convention of 1836 through the eyes of someone who was there: William F. Gray!  Colonel Gray traveled to Texas during the Revolution and was an eyewitness to the Convention held in Washington.  During his travels, he kept a daily diary and his accounts serve as one of the best sources for what when on in the unfinished building now known as Independence Hall.  Try your hand at writing using the same utensils that would have been used by William including a quill, nib pen, and brass pencil.  Contact Kevin Malcolm at kevin.malcolm@thc.texas.gov or 936-878-2214 ext. 224 for more information.