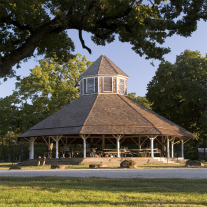 The public is invited to join guest speaker Dr. Carey Latimore, Trinity University, as he discusses "The Emancipation of Texas and Limestone County" as the 150th Sesquicentennial commemorative events for the American Civil War come to a close.

A second guest speaker, Mr. Joe Specht, will follow with a presentation and musical excerpts for "Oil Field Blues: African American Oil Patch Songs" to discuss African American history as it relates to the early-Texas oil boom. Buried locally in Wortham, singer and guitarist Blind Lemon Jefferson was considered one of the most influential blues performers of the early 20th century and will be highlighted.

Chautauqua was an adult education movement in the United States, highly popular in the late 19th and early 20th centuries for the average American before mass media. Named after Chautauqua Lake where the first was held, Chautauqua assemblies expanded and spread throughout rural America until the mid-1920s. The Chautauqua brought entertainment and culture for the whole community, with speakers, teachers, musicians, entertainers, preachers, and specialists of the day. Former U.S. President Theodore Roosevelt was quoted as saying that Chautauqua is "the most American thing in America."

Joe W. Specht (B.A. history, M.L.S. library science, M.A. history) is collection manager of the McWhiney History Education Group and former director of the Jay-Rollins Library at McMurry University. He is the author of The Women There Don’t Treat You Mean: Abilene in Song (State House Press, 2006) and As Falls Wichita, So Falls Wichita Falls … in Song (Prairie Dog Blues Publishing, 2013), and co-editor of The Roots of Texas Music (Texas A&M University Press, 2003) and Abilene Stories: From Then to Now (Abilene Christian University Press, 2013).

This program is made position in part by a grant from the Humanities Texas.