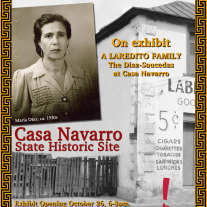 Most visitors to Casa Navarro don’t realize the home was part of a bustling San Antonio neighborhood that flourished for nearly 100 years after José Antonio Navarro’s death in 1871. Navarro’s historic home has seen many residents over the years – most had no idea that it had once belonged to the Tejano statesman.

From the 1940s to the 1960s Maria Diaz called the small adobe kitchen building her home. Her daughter Elisa Diaz-Sauceda and her husband, lived across Nueva Street with their three daughters. The family was close, and spent much time together at Maria’s home.

The Saucedas lived there only a few years before Urban Renewal began taking its toll on the neighborhood. Entire blocks of homes were leveled and residents displaced as parking lots and new buildings were constructed. As the homes surrounding Casa Navarro were turned to dust, Maria Diaz held out, living alone at the corner of Laredo and Nueva streets.

Casa Navarro was nearly destroyed during Urban Renewal. Thanks to the efforts of the San Antonio Conservation Society, Navarro descendants, and dedicated citizens, it was spared the bulldozers. Today it stands as a relic; more than the one-time residence of a Tejano statesman, it is also witness to generations of people who once called these walls home.

Casa Navarro is exhibiting a collection of family photographs and remembrances from the Diaz-Sauceda family through the end of March 2018. Site Hours are Tuesday through Saturday from 10:00 am through 5:00 pm, and Sunday from noon to 5:00 pm, closed Mondays. For more information, call 210-226-4801.