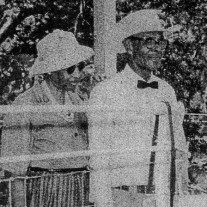 Inspired by the hard work, commitment, and love of Mr. Hal Fields and his wife, Mrs. Mary Fields, we’ll spend a day celebrating the contributions of African American cowboys all through Texas history.
Local cowboys and trail riders will hitch their horses around Varner-Hogg’s corral where visitors can interact with them, and experience riding demonstrations, including cutting. There will also be games and activities for young cowhands, including practice calf roping and a chance to design their own cattle brand.

Please note: Visitors will not be allowed to ride the horses. Children must be supervised by an adult at all times.

Free admission for the program from 11 a.m. to 3 p.m. Donations are welcome.

About Hal & Mary
Hal & Mary Fields had a particular affinity for “The Varner” as Varner-Hogg was known when the Hogg family owned it. Hal Fields was born in Hardin County, Texas on September 6, 1887, and found his way to Brazoria County at age 13 in 1900. He found employment working at Orozimbo, a former plantation about eight miles north of The Varner. Sometime later, Hal met Mary Coleman, who was born on September 19, 1896, and was the daughter of a local cowboy who worked on The Varner.

That chance encounter turned into love and then, marriage for Hal and Mary on September 22, 1911. On a trip to visit Mary’s father, John Gayle, the man who ran cattle on The Varner, offered Hal a position as a cowboy. Hal accepted, and he and Mary moved into a small house located in the plantation’s pear orchard. Upon Hal’s return from World War I in 1918, he and Mary moved into another small house behind the site’s bunkhouse. Mary, who was blind most of her life, often helped cook for guests that Mike Hogg, Will’s brother, would bring down for weekend visits, also, for Will when he stopped by.

Hal continued to work on the site even after the oil fields dried up, working with the livestock. After the last manager left the grounds in the 1950s, Hal served as the site’s caretaker. When Ima Hogg donated the site to the state of Texas in 1958, the agreement included a provision that Hal & Mary receive life tenancy on what then became Varner-Hogg Plantation State Historic Site. The Fields continued to live in their cottage until Hal passed away in 1969 at the age of 82; Mary passed away in 1986. They are buried in WC Paradise Cemetery in West Columbia.