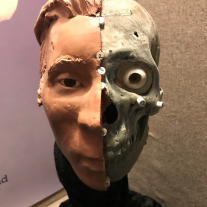 Join us for this special eveing with reknown sculptor and artist, Amanda Danning.

Amanda Danning has gained international recognition as a forensic sculptor. She has achieved this recognition in part, through her consulting work with the Smithsonian Institute on several occasions.  Her facial reconstructions have been the subjects of exhibits at the National Museum of Natural History in Washington, D.C., the National Buffalo Soldier Museum and the Bullock Texas State History Museum.  Hew work has also been display on programs shown on the History Channel and the National Geographic Channel.  Since 2010, Amanda’s work has been featured in several books including on the cover of Kennewick Man by Dr. Douglas Owsley.

With over twenty years of professional experience and an advanced degree in sculpture, Amanda Danning has more than a hundred portraits in museums across the nation.  She has gained extensive experience in the museum industry working as a designer, fabricator and exhibit director. During this event, she will talk about how she has used her skills to recreate some lost faces from history – namely soldiers who fought and died at the Battle of San Jacinto in 1836. Amanda Danning has given faces to five soldiers from the Mexican army, led by Santa Anna, who died in the battle that ultimately won Texas its independence.

Bring a friend and plan to attend!