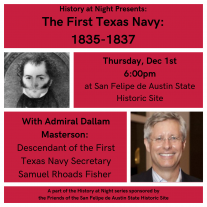 Join us Thursday, December 1st at 6:00pm here at San Felipe de Austin State Historic Site for an informational presentation on the birth of the first navy of Texas.
Presented by Admiral Dallam Masterson, learn about the critical role the First Texas Navy played in winning the Texas Revolution and key role of his ancestor, First Secretary of the Navy, Samuel Rhoads Fisher.
Samuel Rhoads Fisher met Moses and Stephen F. Austin in Missouri in 1819 and decided to move his shipping business from Philadelphia to Austin’s colony at the newly founded town of Matagorda in 1830. Fisher was instrumental in creating the Texas Navy in November 1835, beginning with the acquisition of the first Navy schooner William Robbins (renamed Liberty) that captured Mexican supplies and diverted them to the Texian army to ensure their victory at San Jacinto in April 1836. Fisher signed the Texas Declaration of Independence and was appointed the first Secretary of the Navy for the Republic of Texas by President Sam Houston. When Mexico threatened the survival of the young Republic with a naval blockade of the Texas coast in 1837, Secretary Fisher ordered the Texas Navy on a diversionary cruise to Yucatán that broke the blockade.
A Q&A session to follow the presentation.