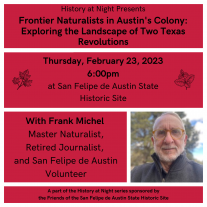 Join us at San Felipe de Austin State Historic Site at 6pm on Thursday, February 23rd for the special presentation, Frontier Naturalists in Austin's Colony: Exploring the Landscape of Two Texas Revolutions, about the natural history of Texas leading up to the Texas Revolution with speaker and site volunteer Frank Michel. This event is part of our History at Night series and is free of charge to attend.

The presentation will focus on three separate naturalists who came to the Texas area between 1828 and 1835. These naturalists recorded an abundance of observations and saw the brewing political revolution and the simultaneous revolution that was beginning to change the natural history of Texas.

A native Texan and Navy veteran, Frank Michel attended University of Texas at Austin and University of Houston, earning degrees in Journalism and History. His career includes nearly 40 years as an award-winning journalist, including 15 years as Editorial Page Editor at the Houston Chronicle. Mr. Michel has also contributed as a Media Fellow at the Hoover Institution on War, Revolution and Peace at Stanford University, as well as experience at the New Mexico Museum of Art and History and the Sandia Mountain Natural History Center. His latest museum connection is as a frequent volunteer at San Felipe de Austin State Historic Site working in the museum’s recreated print shop and assisting in leading school tours and events. Mr. Michel is a Certified Master Naturalist in both New Mexico and Texas with a strong interest and experience researching natural history and those who recorded it.

This event is free to attend, with any donations benefiting our non-profit supporting group, the Friends of the San Felipe de Austin State Historic Site. This event is rescheduled from it's original date of Thursday, January 26, 2023.