History Under the Star: Sam Houston, Scots-Irish Military Traditions, and the Victory at San Jacinto 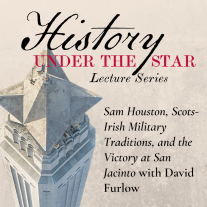 While the men who fought at the Battle of San Jacinto were too young to have participated in the American Revolution fifty-three years earlier, it loomed large in their minds. Many of them, including Sam Houston, were the sons or grandsons of American Revolution veterans, and the Scots-Irish military traditions used in the battles of Culloden, King’s Mountain, and Cowpens influenced the later battles in Texas.

Join us on Saturday, November 19, from 5:00 p.m. to 7:00 p.m. for our History Under the Star lecture “Sam Houston, Scots-Irish Military Traditions, and the Victory at San Jacinto” with David Furlow to learn more about Scots-Irish military traditions influenced the Texas Revolution. Mr. Furlow is an attorney, historian, archaeological journalist, and a trustee of Pilgrim Hall and the Texas Supreme Court Historical Society. He serves as the Executive Editor of the Journal of the Texas Supreme Court Historical Society and has published widely on early Texas and Colonial history.

Cost: $5 per person/$3 per museum member; students are free. Buy your tickets now.