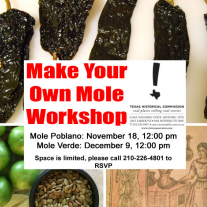 Mole, a traditional Mexican dish that blends the foodways and traditions of indigenous Mexico and Spain, has become a popular sauce to accompany Turkey during the Christmas and Thanksgiving holidays. Learn the ins and outs of making Mole Verde and Mole Poblano from scratch using traditional cookingware and methods at this hands-on workshop presented by Casa Navarro State Historic Site.