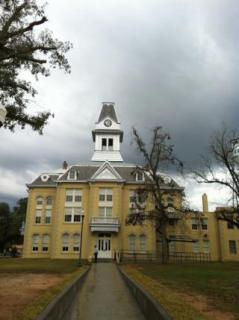 “People stood around the square all night crying and consoling each other.  That courthouse means a great deal to Newton.  It’s where we saw our boys off to war and where we had community celebrations.  We mark our time by the clock tower striking.”
–Bonnie Smith, Former CHC Chair, 2000

"Our community is pulling together now. We are committed to rebuilding.”
–Truman Dougharty, Newton County Judge, 2000

The courthouse is sited at the intersection of Court and Kaufman Streets in Newton.  The 1902 Second Empire courthouse was built by contractors Martin and Moody of Commanche. The three story brick structure features a clock and bell tower, mansard roof and corner quoins. Stylistically, the building is unusual because it reflects a 19th century style popular twenty or thirty years earlier. Destroyed by catastrophic fire in 2000, the courthouse was reconstructed and restored to its 1936 exterior period of significance.

In 1919 and again in 1925 the interior was modified to provide more functional spaces including downsizing the district courtroom. In 1937, a new two-story Newton County jail was completed as an annex to the original 1902 building.  The courthouse and annex were plastered with stucco at that time.

Listed on the National Register of Historic Places in 1997.  Designated a State Antiquities Landmarks in 1981 and a Recorded Texas Historic Landmark in 1974.

Newton County had recently completed a master plan in July 2000 for restoration of the courthouse.  This planning enabled the County and the THC to enter into partnership to accurately rebuild and restore the courthouse to its historic appearance following the devastating fire on August 4,  2000.

The recently completed project reconstructed wood doors and windows, a slate mansard roof, roof dormers and installed a new manufactured bell and clock tower.  The building exterior was restored to its 1936 period of significance. The interior was restored to its 1925 appearance utilizing salvaged long leaf pine for flooring, wainscot, and stairways.  The district courtroom balcony, press metal ceiling and cornice, and furnishings were restored.  A new system of energy efficient heat pumps located underground replaced the former window mounted air conditioners.  The project architect was Marcel Quimby with general contractors J R Jones of Dallas and H B Neild of Beaumont.

Through the Texas Historic Courthouse Preservation Program administered by the Texas Historical Commission, Newton County received a grant of $415,000 in 2002 for the planning phase of the restoration and two additional grants of $3,000,000 in 2006 and $1,038,000 for construction.

Under County Judge Truman Dougharty, county commissioners  initiated the County’s participation in the Texas Historic Courthouse Preservation Program in 2000 by funding a courthouse master plan under the guidelines of the Texas Historical Commission.  Subsequent emergency funding awards from the THC for Planning and Construction enabled the County to fully restore the courthouse. The project was successfully completed in 2012 with strong county leadership and a significant local match.

A rededication ceremony was held on December 8, 2012.