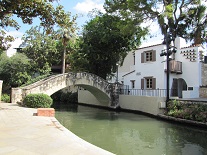 In 1941, the WPA completed the Arneson Theater Pedestrian Bridge at the Riverwalk in San Antonio, which showcases the fine workmanship and masonry taught to young men. The Riverwalk is a path that follows the contours of the San Antonio River, steps below the downtown area. At the end of the 19th century, the city constructed a system of wells to extract the riverwater. However, this caused the water level to drastically decrease, eventually drying out the river. As citizens began protesting the dwindling water levels and overgrowing landscape, plans of converting the river into a park arose. In 1911, a group of businessmen issued an engineering study that advocated for a conduit beneath the downtown area. Although the Riverwalk dealt with years of detrimental floods and heavy rains, the park survived, becoming one of the most popular historic landmarks and tourist destinations in Texas. 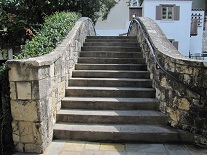 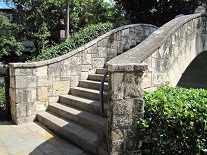 The arched design and stonework sought to enhance the contours of the preexisting landscape and frame the San Antonio River. The bridge helped preserve the river, while enhancing the aesthetics and layout of the city.