The lenticular truss is a unique design in which both the top and bottom chords are curved, giving the truss an oval or lens shape. Lenticular trusses used less material than a standard Pratt or Howe configuration, but their popularity was limited by the high degree of workmanship needed to achieve the unique lens shape. The photo at left, of the Kelley Crossing Bridge near Lockhart, clearly displays the lens shape that gives the lenticular truss its name. 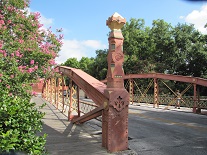 In the United States, lenticular trusses were almost exclusively built by the Berlin Iron Bridge Company of East Berlin, Connecticut. Several of the Berlin Company’s bridges had decorative towers, including the Augusta Street Bridge in San Antonio, shown at left. Although the company mostly did business in New England, they had one salesman in Texas. William Payson of Edna, Texas sold more than a dozen bridges for the Berlin Bridge Co. Payson’s success was probably due more to his questionable tactics than to his bridges’ sound engineering. The Market Street Bridge cost the City of San Antonio $12,000, nearly twice the standard market price. Bridge agents commonly (but illegally) met before bid deadlines to decide which of them would submit the lowest bid. Despite accusations of misdeed, Payson sold Berlin bridges across the state. Eight of these bridges are still standing in Texas, the only remaining lenticular trusses west of the Mississippi. 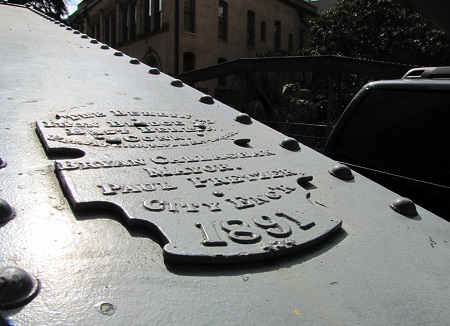 Payson sold the Crockett Street Bridge to the City of San Antonio for $13,000 in 1891 during the administration of the notoriously corrupt Mayor Bryan Callaghan. Upon the bridge’s completion, the city refused to hand over the money, accusing Payson of paying other bridge companies to overbid the job. The court ruled that the contract was invalid on a technicality, and nothing was ever proven against Payson. 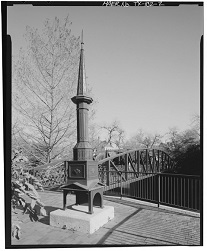 The Berlin lenticular truss on Commerce Street carried traffic into downtown San Antonio beginning in 1881. The bridge was a famous haunt of local artists, including O Henry, who set several of his stories in the area. The City of San Antonio moved the Commerce Street bridge to this location on Johnson Street in 1914; although the original truss has been replaced its impressive decorative towers, or finials, still remain. 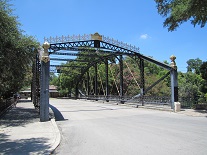 The Brackenridge Park Bridge is easily the most impressive lenticular truss in Texas. The National Youth Administration relocated the bridge from St. Mary’s Street to its current location in 1937 as part of a New Deal city revitalization project.