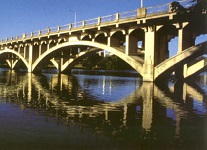 When the United States entered the Second World War in 1941, the country focused on the war effort in the attempts to ensure proper defense. The railroad gradually lost fashion, with increased attention towards highway construction, enabling easy troop and tank transport. Finished in 1942, the Lamar Boulevard Bridge transported military trucks and tanks across the Colorado River. It remains one of the last Art Deco style, open spandrel concrete arches built in Texas. Starting in 1941, the United States focused most of their energies on the war effort, with new technology and research for better defense. Since steel grew to be so high in demand, bridge engineers looked towards alternative materials, primarily concrete.

Once WWII ended, various cultural changes arose that directly influenced bridge building. Middle-class families moved out of central cities and into the suburbs, the automobile grew to immense popularity, and a new minimal movement replaced the Revival focus in architecture.

With the triumph of democracy over fascism, a spirit of optimism spread throughout the nation. With this, engineers and architects applied simple designs onto buildings, houses, and bridges. In Texas, the Texas Highway Department standardized bridge design to improve efficiency and speed, which resulted in less ornate constructions than previous infrastructural projects. 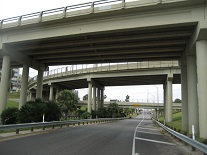 The bridges most familiar to us today, the ones we drive on and pass every day, can all be traced back to this post-war period, which saw the formation of a new, minimal, concrete world.

Sources for information and images can be downloaded here.