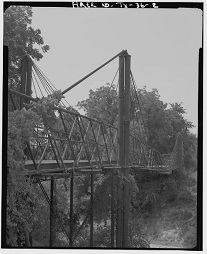 The Bluff Dale Bridge was one of three bridges commissioned from Runyon and Flinn by Erath County in 1890. Barton Creek was another of these bridges; the third does not seem to have survived. The Bluff Dale Bridge showcases Runyon’s peculiar design for the bent, which supports the deck of the bridge at either end. Runyon’s bent is secured by a seemingly unwieldy system of cables and castings.

Barton Creek and Bluff Dale are not technically suspension bridges. In a suspension bridge, two long cables spanning the whole bridge attach to smaller vertical cables which ‘suspend’ the deck. But in a cable stayed bridge like Runyon’s, the cables attach directly to the tower. Cable stayed bridges do not require cable anchorages on the bank to be as strong, because the brunt of the force is placed directly on the tower. 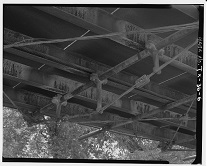 Cable stayed bridges like these were exceedingly rare before World War II, and Bluff Dale may be the earliest bridge of this type ever built. The bridge was relocated to its present site in 1934 and was only closed =to traffic in the early 1990s, 100 years after its initial construction. Wrought iron gas pipes, which Runyon called “needle beams,” make up the deck. Runyon used this repurposed material because it was lightweight, cheap, and readily available in his rural surroundings.