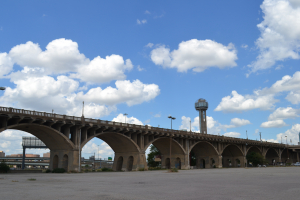 Extending across the Trinity River and connecting the Dallas Central Business District with the early suburb of Oak Cliff, the Houston Street Viaduct is one of the longest bridges with reinforced concrete arches ever built. Despite major changes in the northern setting over the years, the viaduct remains substantially intact. A new concrete handrail was added in the early 1930s and, more recently, stairs were added to the Reunion Arena parking areas. Otherwise, the viaduct has not undergone visible modification.

The reinforced concrete viaduct is 6,562 feet long, 56 feet wide overall, and has a roadway of 44 feet with two 4.5-foot sidewalks. It is made of 51 79'6" arches, a 100' steel girder in length spanning the Trinity River, and 16 panels of concrete bents and girders next to the approaches. The crossing of Lancaster Avenue in Oak Cliff from the last pier to the abutments consists of six panels of girder design. Beyond this is an earthen approach 787 feet in length. All arch piers rest upon timber piles except for the easternmost abutment arch, which rests on bedrock a few feet below the ground surface. Piles were driven into the ground and concrete was poured around them for a firm foundation. Laying of concrete was facilitated by a rigid tower and chute moving on a track next to the viaduct. Bents and girders were poured continuously using two shifts when necessary. Slabs and floor members were also continuously poured.

Due to the flood of 1908, which swept away most of the bridges connecting Dallas to Oak Cliff, the Houston Street Viaduct was built as a result, the first of five concrete and steel bridges built to connect the north and south sections of Dallas. The cost of the project was $570,000, or $2.10 per square foot of floor.  Dallas County paid all construction costs. The contractors were Corrigan, Lee, & Halpin of Kansas City, Missouri. Construction of the viaduct began in October of 1910 and was completed in late 1911.

The Houston Street Viaduct is listed on the National Register of Historic Places (NR #84001641).