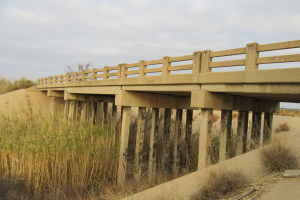 This is a five-span steel and concrete bridge built in 1932 over the now abandoned roadbed of the former CRI&G Railroad. The bridge was designed by M.L. Grady and constructed by contractor E.T. Prator. The bridge is 125' long and contains a 24' wide concrete roadway. It features a main span constructed of steel I-beams encased in concrete. The remaining spans are reinforced concrete girders resting on reinforced concrete pile bents. The bridge's railing is a standard concrete post and double beam deisng. Concrete slab retaining walls cover embankments on both sides of the bridge. The bridge deck is 27' in width and was originally of concrete and later paved with asphalt.

The bridge was constructed to span the railroad bed located approximately 25' below the bridge's deck. The railroad was abandoned in the late 20th century and the steel rails and cross ties have been removed. The bridge carried Route 66 traffic until 1960 when Interstate 40 was completed approximately 30' to the north. The historic roadbed of Route 66 then was designated as a frontage road for the interstate. The bridge continues to be used as part of the I-40 frontage road system.

The bridge's concrete encased steel I-beam design is noteworth and is one of the few example of this bridge type in Texas, and is the last vehicular bridge in Texas directly associated with Route 66.  The bridge retains its original design, form, and materials, and meets the registration requirements for the property type of "Road Bridges" set forth in the Multiple Property Documentation Form "Route 66 in Texas MPS." (NR nomination)