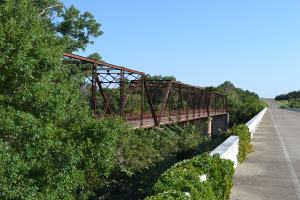 This bridge over the Brazos River is a three-span pin-connected Pratt through truss, constructed in 1914 by Austin Brothers Bridge Company for Johnson County.  The bridge has a total length of 799 feet, with each main span stretching 142 feet in length.  The truss spans are supported by original concrete pier substructures.  The bridge's seventeen approach spans consist of steel beam superstructures and concrete pier substructures.  The bridge has a width of 18 feet with an asphalt surface.  The bridge's original lattice railing remains in place.

The bridge was originally constructed to handle local traffic, as the first structure to provide direct access between Bosque and Johnson counties.  The bridge also developed into a regional transportation link, forming part of the Meridian Highway.  The Meridian Highway was a privately-designated highway route stretching between Burkburnett, Waco, Austin, and Laredo.  In 1917 this section of the Meridian Highway was designated as part of State Highway 2, a major north-south trunk route on the new Texas highway system.  This section of Highway 2 was later redesignated State Highway 98 and State Highway 144.  The later route designations formed the primary route between Meridian and Cleburne, county seats of Bosque and Johnson counties.  The route gradually lost regional importance, as the Waco-Hillsboro-Fort Worth highway became the major north-south artery of the region.  The bridge remained on the highway system until the early 1930s, when State Highways 144 and 174 were realigned.

This bridge is the best surviving example of a Pratt through truss constructed by the Austin Brothers Bridge Company. The Austin Brothers Bridge Company was the pre-eminent private-sector designer and fabricator of truss bridges in Texas. The bridge retains its original truss members, railing, substructure piers, and approach spans.  It is a relatively late example of a pin-connected truss.

This bridge has been bypassed and is now used as a pedestrian footbridge. (Information from TxDOT files)