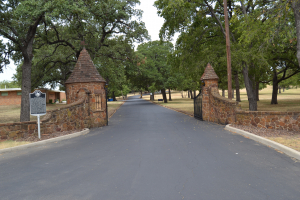 Beulah Adams Marshall bought land here along the Bankhead Highway in the early 1920s and opened a tea room, hosting teas and serving dinners to Dallas and Fort Worth patrons. In 1926, Fred and Mary Browning purchased the property and shortly began converting the facilities into a casino, adding an escape tunnel and secret room for hiding the gambling paraphernalia during raids. Known as Top O' Hill Terrace, the popular spot attracted gamblers as well as visitors who were often unaware of the gaming activities. The restaurant, along with the tea garden that exists today, was a legitimate business, operating alongside a brothel as well as the casino, which benefited from the nearby Arlington Downs racetrack. Top O' Hill Terrace facilities included a horse barn and a private stable for Browning's prized stud, Royal Ford, purchased from oilman and Arlington Downs owner W.T. Waggoner. Contemporary to the Top O' Hill heyday was the outspoken Dr. J. Frank Norris (d. 1952), longtime pastor of First Baptist Church of Fort Worth. The conservative Norris, co-founder of fundamental Baptist Bible Institute, later known as Bible Baptist Seminary and later as the Arlington Baptist College, was an ardent proponent of Prohibition and gambling reform. One of his targets was Top O' Hill Terrace, which he reportedly vowed one day to own. In 1947, Texas Ranger Captain M.T. "Lone Wolf" Gonzaullas led a raid on Top O' Hill, catching the gambling operation in full swing. In late 1956, under the leadership of Earl K. Oldham, the Bible Baptist Seminary bought the property and relocated here, fulfilling Norris' promise, although neither he nor Browning (d. 1953) had lived to see it. Today, the Arlington Baptist College continues to use the site, which retains many of its original structures and features a statue of Norris by noted sculptor Pompeo Coppini. (2003)