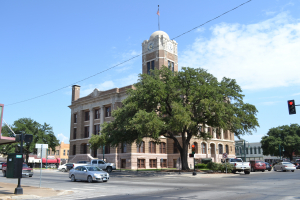 The Johnson County Courthouse is a freestanding structure occupying a full block at the heart of Cleburne commercial district.  The structure is essentially rectangular in shape, with the east and west facades representing the longer sides of the rectangle.  It is three stories high with a full, raised basement and a square tower rising another five stories.  There are generally paired, one-over-one windows; most retain their wooden frames.  The roof is flat, except for a hemispherical dome atop the tower.  The basement level is clad in Texas pink granite ashlar, while the brickwork of the first floor is rusticated.  Second and third floors are faced with smooth Elgin brick, and all four sides have central colonnades with stylized, giant order Composite columns.  The entablature over the colonnades has an incised inscription: "A.D. Johnson County 1912" and symmetrically placed Sullivanesque pendants at the sides and on the tops of the paired east and west facade pylons.  The courthouse is surmounted by an approximately 90' central clock tower.  The first floor of the tower contains courthouse storage and the upper portion of the central atrium, while the bulk of the tower is a hollow shaft.  The upper portion of the tower has clocks facing cardinal directions flanked by terra cotta ornamentation in a chain-like pattern, which in turn have Sullivanesque pendants below.

Unquestionably the most spectacular interior space in the courthouse is the six-story central atrium.  Rising from the basement level, the atrium has Georgia creole marble facing the corner walls and balconies on the first, second, and third floors.  Rich Sullivanesque detailing is found along the cornice, architraves, and along the chamfered corners.  An octagonal art glass skylight crowns the atrium; especially noteworthy are the Lone Star cartouches along the four wider sides.  Other interior spaces are more conventional.  Most of the all spaces have Georgia creole marble wainscoting and tile floors.  Two-panel doors with crinkle glass transoms remain throughout most of the building and have simple brass hardware.  Cast metal stairs have Prairie School balustrades of note, and the 118th District Courtroom has very fine ornamental plaster cornices in a Sullivanesque design.

The newly completed courthouse was accepted by the Johnson County Commissioners Court on November 28, 1913.  Cost estimates varied from $194,606 to $226,000. (Information from THC Courthouse files)