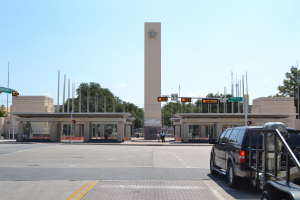 As plans began to take shape for the Centennial celebration of Texas Independence, a group of Dallas businessmen led by R.L. Thornton, Sr., Fred Florence, and Nathan Adams, joined together to promote the city as the host of the major Centennial event. The Centennial Exposition Corporation, formed in 1935, took temporary control of the State Fair grounds, and a team of over 100 architects, artists, and craftsmen soon began to designing the Exposition complex. Employing thousands of people in the midst of the Great Depression, the project resulted in the creation of impressive structures, works of art, and landscaping. Officially opened by Governor James Allred on June 6, 1936, activities of the Exposition included a spectacular parade through downtown Dallas, guest speakers, and nationwide news coverage. In his speech to the crowd, US Secretary of Commerce Daniel Roper declared "America, here is Texas!" President and Mrs. Franklin D. Roosevelt visited the Exposition on June 12. The Exposition ran for 178 days, entertaining over six million people. It was a turning point in the development of the city of Dallas and left a legacy of art, history, architecture, and culture to generations of Texans.