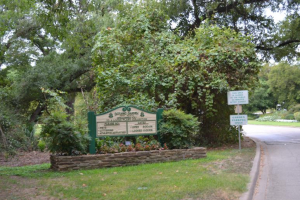 The Fort Worth Botanic Garden is located southwest of downtown near the Clear Fork of the Trinity River and at the southern edge of the city's Cultural District. Today’s Fort Worth Botanic Garden encompasses approximately 109 acres of slightly rolling terrain originally marked by native stands of deciduous trees. Over the years, this acreage has been supplemented with various theme and specialty gardens, naturalized areas, vistas, greenhouses, a conservatory and multi-use buildings. The nominated section of the Fort Worth Botanic Garden contains those areas associated with the original Rock Springs Park, primarily developed between 1929 and 1935 based on the designs of the landscape architecture firm of Hare & Hare of Kansas City, Missouri. Also included is a section to the west developed in the mid-1950s, again designed by Hare & Hare. These areas can be divided into five distinct zones: Rock Springs and Water Gardens Area, Municipal Rose Garden and Vistas, the Cactus Garden, the Garden Center Area and the Horseshoe. The Fort Worth Botanic Garden is listed as a discontiguous district in order to include the small stone shelter that originally served as the terminus for the East Vista. This resource was severed from the Botanic Garden when University Drive was rerouted along the garden’s eastern border in the early 1950s.

The resources of the original Rock Springs Park (Rock Springs Area, Municipal Rose Garden, the Cactus Garden and the Garden Center and adjacent Greenhouse) are tied together through the use of flagstone for trails and walks and rough-cut Palo Pinto sandstone laid in irregular courses for architectural features. The rustic design of the Rock Springs Area provides a counterpoint to the formality of the adjacent Municipal Rose Garden. The placement of live oaks along the walks of the Horseshoe also provides a formal effect.

The Fort Worth Botanic Garden is listed on the National Register of Historic Places (NR #8001400).