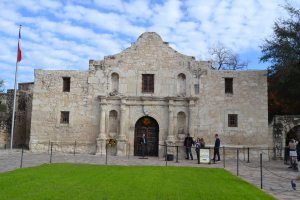 Mission San Antonio de Valero, or the Alamo, was established at this site in 1724.  This was the mission's third, and final, location.  The previous site was nearby in the vicinity of today's St. Joseph's Catholic Church on East Commerce Street.  After a hurricane severely damaged the mission in 1724, it was rebuilt on this site a short distance to the north.

The San Antonio Missions World Heritage Site encompasses a group of five frontier mission complexes situated along a stretch of the San Antonio river basin in southern Texas, as well as a ranch located 37 kilometers to the south.  It includes architectural and archeological structures, farmlands, residences, churches, and granaries, as well as water distribution systems.  The complexes were built by Franciscan missionaries in the eighteenth century and illustrate the Spanish Crown's efforts to colonize, evangelize, and defend the northern frontier of New Spain.  The San Antonio Missions are also an example of the interweaving of Spanish and Coahuiltecan cultures, illustrated by a variety of features, including the decorative elements of churches, which combine Catholic symbols with indigenous designs inspired by nature. (Information from UNESCO World Heritage List website)