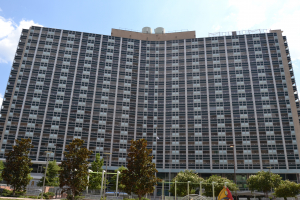 The former Dallas Statler Hilton is an iconic building of mid-twentieth century design located at 1914 Commerce Street in downtown Dallas. The hotel was praised as the first modern American hotel and was designed by William B. Tabler.

Designed as the flagship for the new Statler Hilton chain, the hotel was completed in 1956 at the cost of $16 million. It was the first major hotel built in Dallas in nearly three decades and the largest convention facility in the South.

Architect William B. Tabler introduced several new construction techniques and materials. The first full application of its kind, a cantilevered reinforced flat-slab system reduced the number of columns needed and created a soaring building. Tabler was also one of the first in the county to use a thin-skinned curtain wall design consisting of 1 3/8" panels made of glass and colored porcelain-coated metal. Its innovative features made it a significant contributor to the Modern movement in Dallas, and for the state of Texas. (information taken from Wikipedia entry)