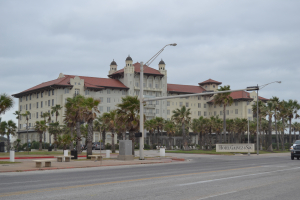 Built at a cost of $1,000,000, this hotel was financed by local businessman and public subscribers to help the economy of Galveston following the 1900 hurricane.  Completed in 1911, it was designed by the St. Louis firm Mauran & Russell.  The Spanish Colonial Revival styling included a red tile roof and white stuccoed walls.  The hotel and city are named in honor of Count Bernardo de Galvez (1746-86), Spanish Governor of Louisiana and Viceroy of Mexico. (Information from RTHL files)