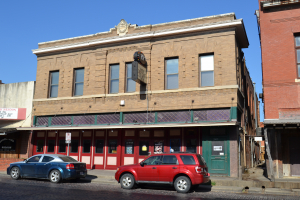 Faced in brown brick, this two-story structure features on its second-story facade a corbeled frieze course, ornate window surrounds, and a pressed metal cornice below a cast stone cartouche.  The street level retains its diamond-paned transom windows, although the storefronts have been altered.  Original ownership and history of this structure has not been documented clearly; directories of 1911 and 1916 indicate a North Texas State Bank office in this vicinity.  During the 1920s and 30s, a baker and a number of grocery stores occupied the ground floor, while the Palestine Hotel occupied the second floor, which was succeeded by the Oasis Hotel in 1936.