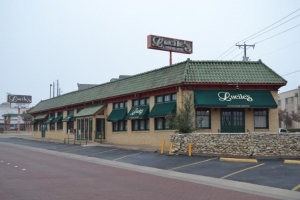 Built about 1928 by west side rancher and entrepeneur Steve Murrin Sr., this building was simply Steve's Place, a name still embedded in floor tile by the front door. In the early 1940s, the Renfro drugstore chain established Renfro's Triangle Cafe there. In 1947, it became Steve's Triangle Good Food. In the western end was Snyder's Grocery from about 1946 to 1956. In 1950, it became Duncan's Cafeteria, and in 1951, Finley's Cafeteria until about 1985. In the 1960s, the grocery space was operated by Murrin's son-in-law Joseph Dulle as the Decor Corner gift stop. In 1989, it became one of the early locations of the Black-eyed Pea restaurant chain when it began. Since about 1994, Lucille's Restaurant has occupied the building, serving fine cuisine and doing lively business. (Fort Worth: The Way We Were)