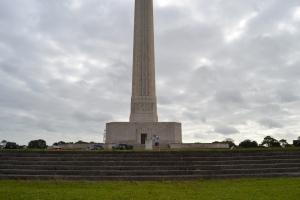 The Battle of San Jacinto was the concluding military event of the Texas Revolution and occurred on April 21, 1836. At mid-afternoon April 21, 1836, two miles to the north, General Sam Houston with about 1,000 Texans in 18 minutes annihilated the 1,400-man army of Antonio Lopez de Santa Anna, President of Mexico. Screened by trees and rising ground, Houston's men formed with Edward Burleson's regiment at center, Sidney Sherman's on the left wing, artillery under George W. Hockley on Burleson's right, the infantry under Henry Millard on the right of the artillery.  Under M. B. Lamar, a future president of Texas, the cavalry took the extreme right, to cut off possible flight of Mexican troops. Their four-piece band playing a popular love song, "Will You come to the Bower," the Texans attacked at a run, crying "Remember the Alamo! Remember Goliad!" Such was their fury that 630 of the enemy were killed, 730 captured, enemy lead shattered Gen. Houston's ankle, but he lost only nine men killed or mortally wounded and 30 wounded less seriously.  San Jacinto stands as one of the world's greatest victories. It gave Texas independence, and with her annexation nine years later brought into the Union all or parts of Arizona, California, Colorado, Kansas, New Mexico, Nevada, Oklahoma, Utah, and Wyoming. (Information from THC Subject Marker)