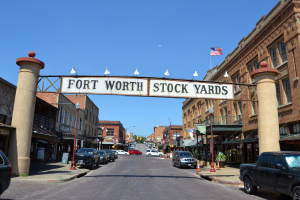 A rural site three miles north of Fort Worth was chosen for the first permanent stockyards in 1890 and this forms the nucleus of the current Fort Worth Stockyards Historic District.  As Fort Worth gradually spread north, an effort was made to keep this rich industrial area composed of packing houses and stockyards from being annexed to Fort Worth.  An area one mile square containing the industrial complex was laid out as Niles City in 1898. In 1902, when the large meat packing companies of Armour and Swift located at this site and brought prosperity to the industry, a new era of construction began, which forms the basic style of buildings characteristic of the district today.

The boundaries of the historic district encompass the original location of the Armour and Swift packing plants built in 1902, the Stock Exchange Building built in 1902, the Coliseum built in 1908, the Horse and Mule Bars rebuilt in the 1920s, the area of the stockyard pens, the commercial district that developed along the west end of Exchange Avenue and North Main Street in the early 20th century and the location of an early competing packing plant.