The Great Depression created new challenges for the Texas Highway Department (THD), which had just gained some organizational stability and professionalism. Despite the social struggles, this era was still filled with road improvements and changes in Texas. There was an increase in federal funding through federal work-relief agencies, and this funding aided THD projects. If it the federal government had not aided the THD, Texas would have likely struggled to maintain a road building program during the first few years of the Great Depression. The Texas Legislature also contributed work-relief highway construction, but its efforts could not meet the demand.

After President Franklin D. Roosevelt was inaugurated in 1933, he did not hesitate to institute his New Deal programs and policies to stabilize the nation’s economy and increase employment. Texas received substantial federal relief funding from these New Deal programs, especially because President Roosevelt supported massive road construction projects. This funding replaced the money originally contributed by the counties.

By the mid-1930s, the U.S. Supreme Court ruled many of President Roosevelt’s New Deal acts as unconstitutional because they stretched the boundaries of the federal government’s power. This forced the reorganization of federal world relief projects, which affected road construction in many ways. The National Recovery highway program was shut down, but its projects continued to be funded until 1940. Congress revived the federal-aid highway program, and after the FERA was dissolved in 1935, the federal government stopped offering direct grants to states and localities for relief payments. Roosevelt’s administration created the “Second” New Deal programs to replace the first ones.

Consequences of the New Deal Programs 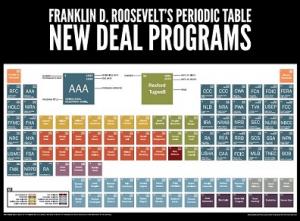 Road policy from the Depression-era and WPA allowed the THD to expand its authority over urban and rural Texas roads both outside and inside the existing state system. Due to the conditions of the Great Depression, many local communities lost the ability to afford road maintenance. In 1937, the THD took control of all highways in rural towns with a population less than 2,500.

As the nation’s economy improved and the Roosevelt administration cut the WPA work force in half in 1937, the THD organized to takeover WPA funding for Texas road construction. During the last years of the Great Depression, the THD took control over rural road construction. The THD also began planning a state Farm-to-Market (FM) road system for after World War II. Texas counties regained some ability to fund state highway system during the 1940s and 1950s, but they were never able to reclaim power over Texas roads. For more information on New Deal programs in Texas, read about bridge and parks construction.

State Highway 16 in Palo Pinto County is a WPA-constructed road corridor that is listed in the National Register of Historic Places. To find out more, click here.