Because Texas required less rebuilding after the Civil War compared to other Confederate states, local governments could continue developing roads. In 1866, state legislation removed control of road development from the county courts and gave it to a new police court. This new court took all the roadwork completed by the county courts and used convict labor to construct new roads and bridges.

More organized cattle trails lasted into the 1880s, where millions of cattle were driven to Kansas or Missouri to be shipped to Chicago and its meat packing industry. Some of the most important cattle corridors included the Chisholm Trail, the Western Trail, and the Goodnight-Loving Trail. While there were no roads or bridges built along these cattle trails, many of the later roads followed some of these routes. The cattle trails helped restart Texas’ economy, especially because of the lack of consistent rail lines, which made it cheaper to ship the cattle from Kansas than from Texas.

Railroads were a primary improvement in Texas after the Civil War. It was not until 1873 that Texas railroads finally connected to the national rail system. Railroads were the primary source of transportation in Texas in the late nineteenth century. Many communities relied on railroads since residents mostly used roads to travel between farms, agricultural processing centers, and towns. Roads consisted of earthen trails, and county governments used railroads to provide money to construct better roads and bridges. 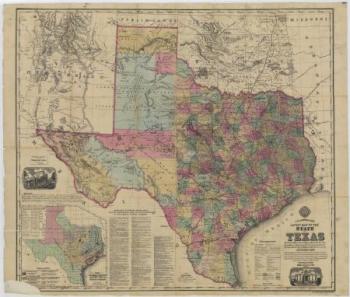 In 1870, the Texas Legislature returned road and bridge construction to the county court system. The 1870s saw an inconsistent and limited road and bridge construction as the Texas Legislature frequently reconsidered funding mechanisms. At this time, mail delivery schedules were key in determining road classification. Texas’ 1876 Constitution reorganized county government. It established commissioners’ courts to govern the county and control road construction, but it also restricted the local governments’ ability to raise funds for road and bridge projects; they could not use taxes or bonds to raise money for these improvements. 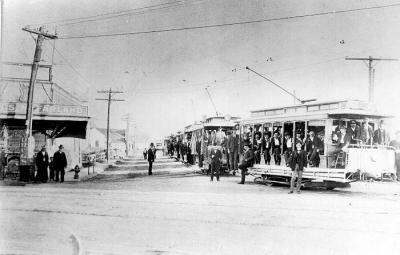 As the population continued to rise into the 1880s, the need for public services and goods in both urban and rural settings increased the demand for better roads and bridges, especially with growing users of automobiles and bicycles. By the early 20th century, counties gained more authority to finance road and bridge construction and improvements. There remained a disparity between urban and rural areas. Urban cities experienced rapid growth and would spend their money on paved roads and inter-urban electric railways for their citizens.

In 1893, the federal government formed the Office of Road Inquiry within the United States Department of Agriculture to become more involved in road construction. In 1899, it was renamed the Office of Public Road Inquiry. The Office of Public Road Inquiry was a source of road-related information to address construction and administration. As federal and state governments began to focus on developing more roads, Texas resisted creating a statewide system and statewide transportation department. As the population spread out across the state, Texas needed better roads further out from the cities to support people and transport supplies. Cities were concerned with conditions within their city limits, but counties were also interested in their own needs. Due to little cooperation between cities and counties, there was no large-scale planning to create a highway system. Between the high price of construction and counties having different budgets and priorities, Texas road conditions remained inconsistent, and rural areas faced inadequate drainage systems or bridges. However, new road and bridge technology and techniques flourished across the country. Counties upgraded and altered roads as they began to update, construct, or reuse new bridges.