Seventy-five years ago an extraordinary event took place. On May 30, 1942, just five months after America's entry into World War II, over 150,000 Houstonians gathered in the heart of the city to witness the induction of a thousand men into the U.S. Navy. Dubbed the "Houston Volunteers", these were no no ordinary wartime recruits. They had all volunteered to replace the crew of USS Houston, a heavy cruiser which had disappeared in the Pacific months before after one last, ominous message: “Enemy forces engaged.” Presumed lost, the ship's fate would not be known until the end of the war.

The disappearance of Houston unleashed a patriotic fervor that was palpable in its namesake city that spring. Houstonians immediately undertook a bond drive to pay for a new warship. On the day of the induction three marching bands entertained the crowds, and planes flew in formation overhead from nearby Ellington Field. In honor of the occasion Mayor Neal Pickett read a special message from the nation's leader, which was broadcast around the world. President Franklin Roosevelt's words captured the defiant mood of a city and nation: “Our enemies have given us the chance to prove that there will be another USS Houston, and yet another USS Houston if that becomes necessary, and still another USS Houston as long as American ideals are in jeopardy.”

In time, USS Houston CA-30 would become known by another name: the Galloping Ghost of the Java Coast.

America's entry into the war in December 1941 brought badly needed ships to the beleaguered Allied fleets. Through losses in the British Royal Navy, USS Houston had become the most powerful ship of the Australian, British, Dutch, and American (ABDA) Alliance fleet in the Southwest Pacific. Shortly before midnight on February 27, 1942, the fleet encountered the Imperial Japanese Navy off the northwest coast of Java in the Dutch East Indies and endured heavy casualties. Before being taken out of action the ABDA flagship, Dutch light cruiser HNLMS De Ruyter, ordered the two remaining ships to retire from the action: USS Houston, and the Australian light cruiser HMAS Perth.

Both went down fighting - first Perth, and then Houston half an hour later - with a staggering loss of life: Perth lost half her crew, while only a third of Houston's 1,068 sailors and Marines survived. In the hours and days that followed, survivors from both ships were picked up by the Japanese and brought to prisoner of war camps on the Malay Peninsula, Japanese islands, and in Burma and Thailand. Those held in the jungles of the latter labored (and in many cases died) on the Thai-Burma Railway. 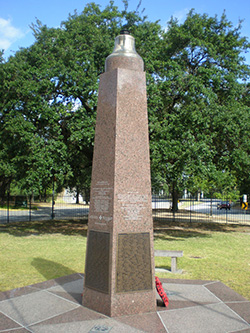 For the handful of Houston and Perth survivors and their families, a strong connection remains to this day.The hardships they endured, during the battle and afterwards in captivity, created a shared experience that has crossed national boundaries. In an interview with the Australian Broadcasting Corporation, David Manning, then an 18-year-old Australian cadet mishipman aboard HMAS Perth, describes the harrowing foundation of this shared bond:

"The Battle of Java Sea...in seven hours it became - from a fleet of 14 ships - it became a fleet of two ships. And Perth and Houston, they were the only two left as fighting ships...I'd climbed over the guard rails and I have no recollection of an explosion or anything like that, it was just - suddenly I was corkscrewing in the water. I was a non-swimmer, but I found myself in very close proximity to a floating net which was a life-saving device from the ship and it was pretty well full of people. But I found a spot to hang on to...We stayed in this boat collecting more and more both Perth and Houston survivors and we finished up with a very loaded boat and attempted to get ashore. [Houston survivor Bill Stewart] was very badly burned in the sinking of [his] ship. There was nothing we could do other than to talk to him. Many years later when I went over to [the city of] Houston, I walked into the Houston memorial room at the University of Houston and a voice said "Manning!" and it was Bill Stewart. And I got a kick out of that. Forty-odd years later, he remembered the moments we spent together..."

This close connection has been recognized by both nations. In 2013 the USS Houston Survivors Association and members of the U.S. military were invited to walk in Australia's Anzac Day Parade, an unprecedented honor. At a national level, both Arlington National Cemetery and Melbourne's Shrine of Remembrance have trees planted in memory of the lost ships and the men who served on them. And the cities of Perth and Houston have both recognized their dead with memorials. In Houston, a memorial can be viewed in Sam Houston Park. Temporary and permanent exhibitions can also be viewed in June 2017 and beyond.