The U.S. Army detained Alien Enemies for the Immigration and Naturalization Service (INS) at posts across the U.S. where the number of apprehensions was so small that it was not feasible for the INS to operate detention facilities in that vicinity. The internment camp at Fort Sam Houston (San Antonio) opened in late February 1942. The confinement site’s first internees were Japanese, German, and Italian enemy aliens living in Texas, Louisiana, and Mississippi. On April 30, 1942 the Spanish Consul, serving as the protectorate nation for the Empire of Japan, and joined by representatives of the Special Division of the State Department, inspected the confinement site and reported a total camp population of 107 enemy aliens. Due to the INS efforts to parole and the Department of State’s efforts in repatriating alien enemies, the confinement sites’ population does not appear to have peaked above 150 total detainees while in service. 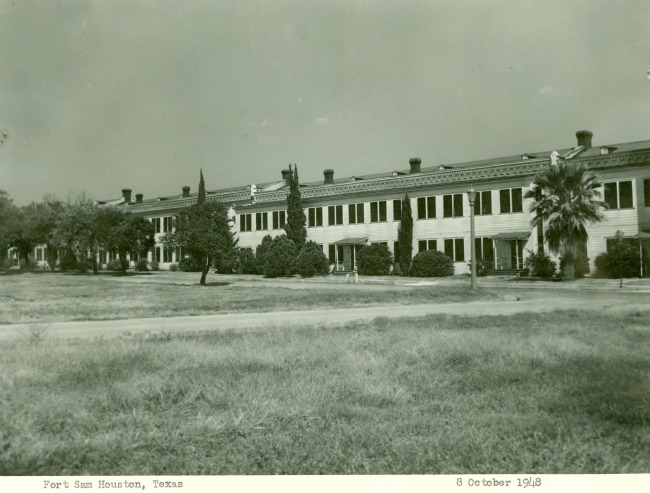 At first, internees were held at one of the post’s “Old Infantry Long Barracks;” [pictured above] however, this site was temporary as internees were soon relocated in April to the northern edge of the post at Dodd Field (an airfield). The stockade took in an estimated 20 acres, surrounded by a double barbed-wire enclosure consisting of two 10-foot high fences, around two compounds connected by a passageway. There were eight elevated guard towers placed at intervals, and the entire stockade was under constant armed guard. Due to the small number of enemy aliens held at Fort Sam Houston, all three nationalities were grouped together. Internees wore their own civilian clothing, and the detention camp’s regulations permitted internees to write two letters and one postal card each week with no restriction placed upon the persons to whom the communications were addressed. Internees were housed in walled tents mounted on a wooden foundation measuring approximately 16-feet square. These tents were nicknamed Victory Huts during World War II, for the ease in assembly, adequate protection from the elements, and low costs to the government, which purchased these housing units in the tens of thousands to house U.S. servicemen. The Victory Huts could be heated by stoves during the colder months and had mosquito netting for the summer. 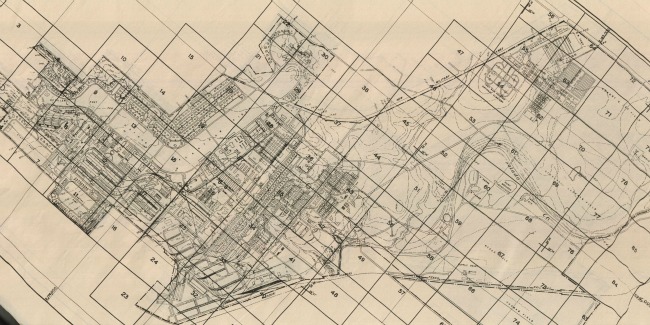 By late 1942, the U.S. Army realized it needed to focus the efforts of its Provost Marshal General's Office on the expected task of guarding hundreds of thousands of Axis [Japan, German, and Italy] prisoners of war. In response, the DOJ gave the INS increased authority to house potentially dangerous Alien Enemies (including American citizens) at internment camps throughout the U.S. The Special Alien Enemy Hearing Board, established by the DOJ on August 22, 1943, began the transfer of internees from U.S. Army camps to INS camps. The special board conducted visits to U.S. Army detention centers to conduct hearings, eventually moving 4,120 internees to INS-controlled camps across the U.S. (including all three Texas sites). This was conducted primarily because the U.S. War Department believed the unfolding two-front war in Europe and the Pacific would generate a need to house hundreds of thousands of enemy prisoners of war taken on the field of battle. As a result, Dodd Field Internment Camp stopped holding enemy aliens before the end of 1942.

Dodd Field Enemy Alien Detention Station’s internee population never truly expanded during the war due to its temporary nature and closure by the end of 1942. Nevertheless, a number of internees held at this confinement site volunteered or were “volunteered” for repatriation. 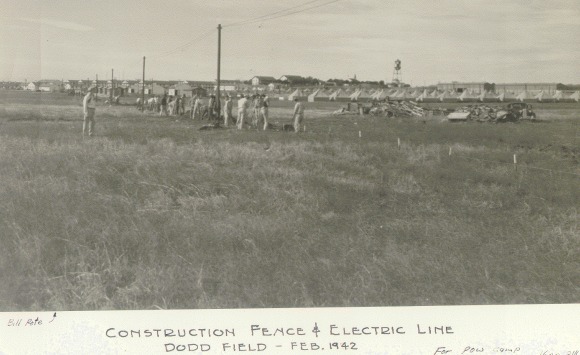 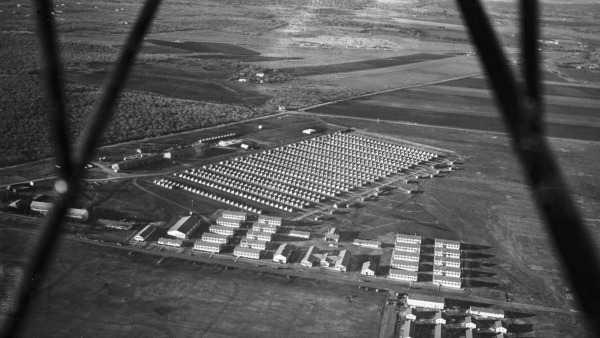 THC historians have not yet located and conducted oral history interviews associated with Japanese, German, and Italian U.S. citizen and Enemy Alien internment at the Dodd Field Enemy Alien Detention Station. If you are aware of anyone who was interned or worked at this confinement site please contact the Military History Program Coordinator, Steven Cure, so we may reach out to them for an interview.