The War to End War

On April 6, 2017, the United States observed the 100th anniversary of America's entry into the First World War. This "war to end war," as H.G. Wells put it, had a profound impact on the country. An army which in 1914 ranked 17th in the world had swelled to 4.7 million in 1918. By the war's end over 116,000 Americans would be dead—more than in the Korean and Vietnam Wars combined—and more than 200,000 would return home wounded.

Politically the United States emerged from the war as an important, albeit reluctant, player on the international stage. At home, it weathered intense social and technological changes that would affect the country for years to come. These included the growth of aviation, prohibition, and women's suffrage, the Great Migration, and anxieties about race, class, and gender that spilled into the 1920s. Texas was at the epicenter of much of this change.

Rapid mobilization in 1917 brought a flurry of camp construction to the state. In all Texas hosted 19 U.S. Army posts, at least nine of which served as military training camps, and another nine as military airfields—several of which helped train British and Canadian flying cadets. The cities of Houston, Waco, Fort Worth, and San Antonio were particularly transformed. In addition to the influx of "doughboys," manpower shortages and increased wartime needs opened up new employment opportunities for those who previously had limited access. Farm families and small-town residents moved to major cities to work in war industry plants and at military posts. Women found their roles 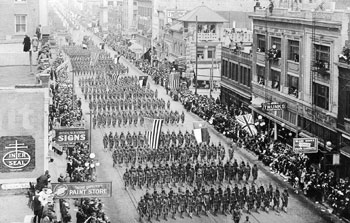 changing too, serving as nurses, raising money for Liberty Bond drives, and getting involved in Red Cross initiatives. Few lives remained untouched by the war.

Out of the nearly one million Texans who registered for the draft, roughly 200,000 served in the armed forces. Three earned the Medal of Honor, and over 5,000 lost their lives. Texans served in a variety of military branches and units, but the majority found themselves in the American Expeditionary Forces (A.E.F.) in two full-strength infantry divisions: the 36th Infantry Division, made up of the Texan and Oklahoman National Guard, and the 90th Infantry Division, primarily comprised of white and Hispanic draftees from Texas and Oklahoma. In contrast, the over 30,000 African American Texans who served did so predominantly in the two segregated A.E.F. units: the 92nd and 93rd Infantry Divisions. At least 65 African Americans from East Texas served in the famous 369th Infantry Regiment, or "Harlem Hellfighters". Like their Latino counterparts, African Americans experienced systemic racism both within the military and at home, despite both groups distinguishing themselves: numerous African American soldiers received the Croix de Guerre from the French government, while one of the most decorated Texans was a Mexican national, Marcelino Serna.

Today, generations after the end of World War I, evidence of that era and reminders of its impact on Texas can still be found across the state’s cultural landscape. The war’s enduring mark is evident in our town's honor rolls, monuments, historical markers, cemeteries, and street names; at active military installations like Fort Sam Houston in San Antonio and Fort Bliss in El Paso; in the stories passed down through our families; and at numerous parks such as Fort Travis in Galveston, Memorial Park in Houston, and the Battleship Texas State Historic Site in La Porte. As we mark the two-year centennial of American involvement in the First World War, we encourage Texans to learn more about the First World War stories hiding in plain sight in their communities.

For those interested in exploring the war’s heritage in the Lone Star State, visit the THC’s Texas in World War I Historical Marker Map featuring an interactive display of locations, text, and photos. 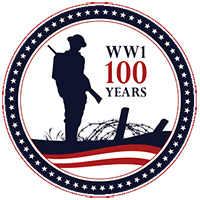 Numerous World War I commemorative efforts have been organized at the national and state levels in honor of the “Great War.” The U.S. World War I Centennial Commemoration Commission serves as the lead organizer for the nation’s commemorative events and coordinates with their state counterparts and individual institutions to raise awareness of America's involvement in the First World War. Established by the World War I Centennial Commission Act, part of Public Law 112-272 passed by the 112th Congress and signed by President Obama on January 16, 2013, this organization has three primary goals: to plan, develop, and execute programs, projects, and activities to commemorate the two-year centennial (until June 2019). They are a great source for information about centennial activities across the nation, as well as available resources and programs.

Another institution dedicated to preserving the memory of the First World War is the National World War I Museum and Memorial in Kansas City. As well as looking after the Liberty Memorial, they also host permanent and temporary exhibitions on the Great War, maintain an extensive archival collection and online database, and provide interpretative material for educators.

Closer to home, the Texas World War I Centennial Commemoration Association was created by grassroots volunteers with a passion for preserving the history of Texas’ involvement in the First World War. Since 2015 they have actively engaged stakeholders, including museums, civic and veteran groups, historic sites, academic institutions, military bases, and more. Their central goals are to increase information and awareness about the war, identify WWI-era veterans and their gravesites and monuments, commemorate important events, faciliate contact between like-minded organizations, and partner with educators across the state. Check out their website if you belong to an institution which would like to get involved in World War I commemoration, or are simply interested in what is happening in the Texas and WWI centennial community.

For Texas educators, the Texas State Historical Association is a fantastic source of educational material for the classroom. Visit their World War I Resources for Teachers section for information on TEKS requirements, upcoming educational events, document and image repositories, useful videos, and more.

In 2016 Governor Greg Abbot designated the Texas Historical Commission as the lead agency to commemorate the American WWI centennial. As a result, the THC has several centennial projects at various stages of development.

We are also working on creating a searchable database of WWI-related sites, monuments, and archival collections within the state. Texans are encouraged to share information regarding the war’s legacy in their communities, or details about centennial events that can be promoted in THC's calendar of events. You can do so by contacting us at militaryhistory@thc.texas.gov or by mailing information to

Another way the public can help commemorate the two-year centennial of America's involvement in World War I is by encouraging their county historical commissions to apply for a state historical marker on a WWI-related topic. The THC accepts historical marker applications through county historical commissions each fall for the following calendar year. The next application period will start in September and run through November. For more information about the marker program, contact the agency’s History Programs Division at 512-463-5853.