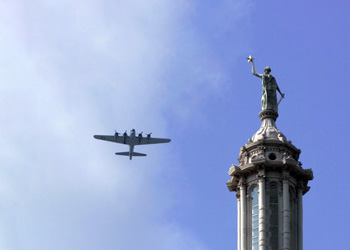 The Empire of Japan's attack on U.S. forces at Pearl Harbor, Hawaii, December 7, 1941, motivated the United States to join the Allies' struggle against Japan, Germany and Italy during World War II. Texans responded to the call for troops in great numbers. After four long years of war, Texas had supplied a greater percentage of men and women to the armed forces than any other state with more than 750,000 in uniform.

While thousands fought on foreign battlefields, others played vital roles within Texas' borders. Fair climate, frequent clear skies, bountiful resources and a central location made Texas an ideal setting for wartime facilities. Military posts sprang up statewide to accommodate the constant stream of new recruits, and industrial plants developed rapidly in support of the war effort. As a result, Texas beef, petroleum products, medical supplies, weapons and equipment were used by troops overseas.

Before the war, Texas was sparsely populated; there were more people living in New York City at the time than in the entire state of Texas. Most Texans lived on farms or ranches or in small towns, and only about 40 percent had a high school education.  Only one in five owned an automobile, one in ten had access to a telephone and one in six owned a radio. Most women worked at home or on farms. The Great Depression affected the entire population, but particularly the agricultural and petroleum industries that dominated the state’s economy. In short, Texas on the brink of war was mainly agrarian in both employment and attitude, largely insulated from world events and still languishing in 19th-century traditions in such important matters as gender and ethnicity. All that began to change on December 7, 1941.

Impacts of the Military Presence in Texas

During the war, more than 1,500,000 military personnel came to Texas for training. War-related industry lured farmers, small-town residents and others into developing urban centers. Many workers were women, and many were other than Caucasian. Texas quickly became more urban than rural, with a net population growth of 33 percent, and the Great Depression faded into memory.

The military’s presence in Texas grew exponentially during World War II. There were 142 major military installations across the state, and more than 750,000 Texans served in uniform during the war. Some rose to the highest levels of command, including Adm. Chester W. Nimitz, Gen. Dwight D. Eisenhower and Col. Oveta Culp Hobby. Thirty-three Texans earned the Medal of Honor, including Audie Murphy, the army’s most decorated soldier, and Cmdr. Samuel Dealey, the war’s most highly decorated naval officer. Among the Medal of Honor holders were five of Latino descent. Tragically, more than 22,000 Texans gave their lives while in service during the war.

Changes after the War

Despite the horrific human toll, the war brought lasting progress to the Lone Star state. Civilians on the home front played a huge part in attaining victory; scrap metal drives, war bond campaigns and rationing all contributed to the war effort. Manufacturing increased fourfold, the permanent population increased, and the urbanization and modernization of Texas were well underway. Many military installations closed at the end of the war, and some wartime boomtowns were all but abandoned. Because of World War II, the face of Texas changed forever. 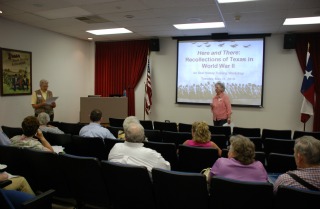 The Texas Historical Commission’s (THC) Texas in World War II initiative is a multi-year statewide effort to honor the role of Texas during the Second World War. The THC launched the initiative on September 2, 2005 at the Texas State Capitol in Austin. The grant-funded initiative is composed of various components that include: Vignettes of Wartime Texas (a special series of 21 historical markers); a heritage tourism travel brochure; a comprehensive statewide survey of more than 1,700 World War II military and home front sites; a series of 55 regional oral history training workshops entitled, Here and There: Recollections of Texas in World War II; and enhancement and expansion of the THC’s Texas in World War II webpages. While the Initiative in some cases covers topics such as overseas service, the focus of the project is on sites and stories in Texas.

Those interested in further information about the Texas in World War II initiative or in sharing information regarding military and home front sites for the statewide survey should contact the THC’s Military Historian. Interested in helping, Make a gift to support the THC's Texas in World War II initiative with a charitable donation to the Friends of the Texas Historical Commission.

The Prisoners of War in Texas Lesson Plan for high school students discusses the prisoner of war camps in Texas during World War II, as well as the lesser-known story of internment camps, and their economic impact on the state.

Please return to this web page periodically for updates on related programs and links.

Read more about Texas in World War II in the Handbook of Texas Online.