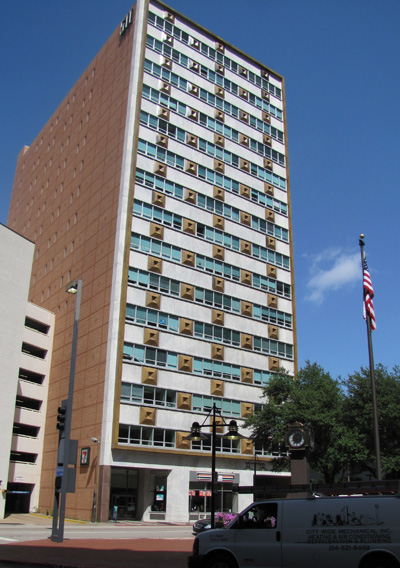 The 15-story 511 Akard Building in downtown Dallas was built by the Relief and Annuity Board of the Baptist General Convention in 1958 to house its headquarters and produce revenue through office leasing. The Relief and Annuity Board, whose leadership was comprised of major Dallas Baptist figures, was established to provide pension and disability benefits to retired Baptist ministers, their widows and orphans. Under the leadership of the Board, the assets of the organization grew steadily, providing financial leverage and investment opportunity for the organization, and retirement security for Baptist workers in several states. The actions of the Relief and Annuity Board shaped the face of downtown Dallas and, in conjunction with the First Baptist Church and the Baptist General Convention of Texas (BGCT), which developed properties in a large downtown district that became known and “Baptistville.”

The 511 Akard Building lies at the western edge of this district and is emblematic of the rapid growth of the church and the related assets of the Board. An investment comprised primarily of speculative office space, it served as the home of the Relief and Annuity Board for 25 years and of the BGCT for 11 years. The Board is still in operation today as Guidestone Financial Services, an organization with $8.8-billion in assets as of 2009. The building was listed under Criterion A in the area of Commerce for its association with the Board’s financial investments, and Criterion C in the area of Architecture, as a good local example of late 1950s modern skyscraper design in downtown Dallas. The building meets Criteria Consideration A (Religious Properties) because it represents the secular business investments of the Baptist General Convention, not only as the location of the Relief and Annuity Board on two of its floors, but also as a property constructed primarily to produce revenue through leasing.