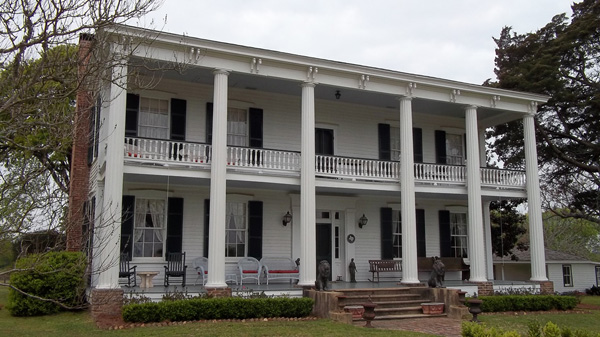 Monte Verdi is the former cotton plantation of Julien Sidney Devereux and his wife Sarah Ann Landrum Devereux. Located in the Glen Fawn community in southwestern Rusk County, Monte Verdi served as one of the county’s most economically and historically significant plantations and one of the largest antebellum plantations in Texas. The main house (completed in 1856) is a good example of Greek Revival plantation architecture in Texas and achieves greater local significance as one of the last remaining antebellum plantation houses in rural Rusk County.

After Julien’s death in 1856, Sarah became Rusk County’s most successful female planter. Despite political and economic challenges, she remained a prominent civic and economic leader in the county through the Civil War. As a successful agricultural enterprise, the plantation was an important contributor to the county’s economic development. That success was achieved through slave labor, and Monte Verdi was home to a large African American slave community. Though their residential quarters no longer stand, archival sources provide a unique perspective of the community member’s lives and their contributions to the plantation’s successes.