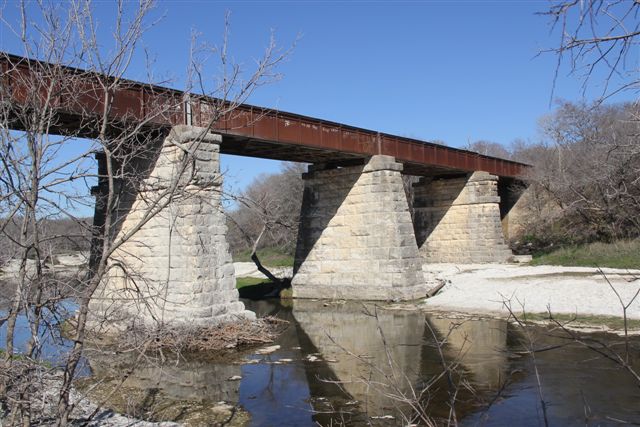 The Nolan River Bridge was listed in the National Register of Historic Places on December 4, 2012, at the local level of significance under Criterion C in the areas of Engineering and Transportation.

Nolan River Bridge 303-A of the Gulf, Colorado and Santa Fe Railway at Blum, Texas, is a single-track, steel plate, through girder bridge supported by battered stone piers. It contains six spans between the abutments and five supporting limestone piers. The steel girders rest on cast concrete caps atop the piers and abutments. The bridge was constructed in stages between 1899 and 1903 to replace an earlier structure. From that time through summer 1952, it carried all of the through traffic of the Santa Fe Railway between Chicago and Galveston. Due to realignment to higher ground concurrent with construction of the Whitney Dam on the Brazos River, the railway line shifted away from its original route in 1952. The company transferred ownership of the structure to Hill County, which adapted it to carry vehicular traffic as a one-lane road bridge. It has served that role with no further significant modifications for over half a century. Though no longer used for rail traffic, the bridge’s character defining features—including the riveted steel plate girders, floor system, and abutments—remain in place with a high degree of integrity.