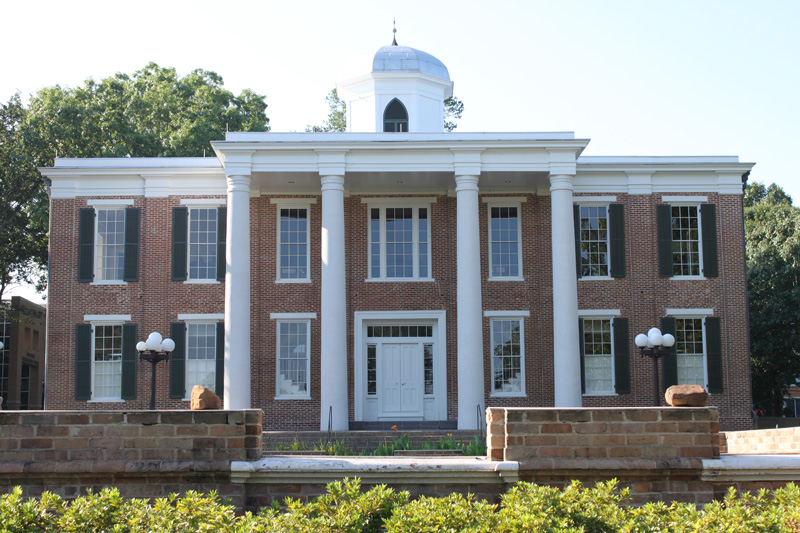 Austin Hall, located on the campus of Sam Houston State University in Huntsville, was added to the National Register of Historic Places on January 2, 2013. The building is listed at the state level of significance under Criterion A in the area of education, as well as at the local level of significance under Criterion C in the area of architecture.

Completed in 1852, Austin Hall is situated on top of the site once known as “Capitol Hill.” A good local example of Greek Revival public architecture, it features a wide entrance portico supported by prominent columns, symmetrical composition, a low pitched hipped roof, a wide cornice line, tall multi-light windows, and an entrance door surrounded by narrow rectangular sidelights and transoms. It’s refined style reflects the level of cultural and economic development of Huntsville in the early 1850s.

Until Texas established state-supported institutions of higher education in 1876, colleges were private endeavors, typically supported by religious organizations. Austin College, chartered in 1849 and supported by the Presbyterian Church, was among the earliest colleges chartered in the newly established State of Texas. Although Austin College eventually moved to another city, Austin Hall continued to play a significant educational role, particularly when it became the home of Sam Houston Normal Institute. With help from the Peabody Educational Fund, Texas took serious steps towards establishing a public education system during Reconstruction. As the new public education system gradually took hold, and as the population began to boom after Reconstruction, the demand for qualified teachers grew exponentially. Texas responded by opening two state-supported teacher training institutes in 1879—Sam Houston Normal Institute (for whites) and Prairie View Normal Institute (for African Americans). As the educational needs of the state evolved, so too did the curricula at institutes of higher education, and Austin Hall’s story reflects this evolution. First constructed as a private, religiously-affiliated college, the building subsequently served a public institution’s growth from a normal school to a college to a university. Austin Hall was designated a Recorded Texas Historic Landmark in 1964 and a State Archeological Landmark in 1982.

UPDATE: The Austin Hall nomination was highlighted by the National Park Sevice on its weekly list, published January 11, 2013.