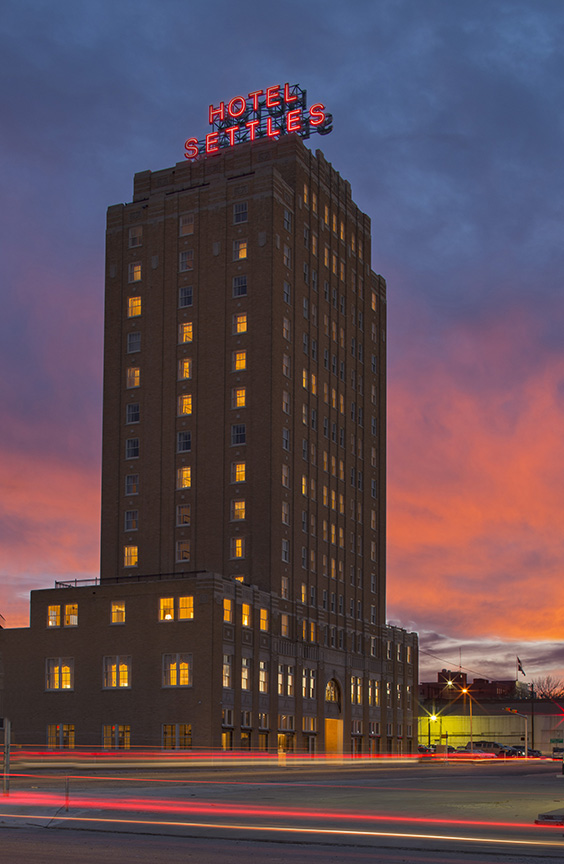 Constructed in 1930, the Settles Hotel in Big Spring, Howard County, Texas, anchors the town’s downtown as a distinctive landmark visible for miles. David S. Castle, a prominent West Texas architect, designed the three-part vertical block building in the Art Deco style. It is a reinforced concrete and brick building fifteen stories tall with a basement and is an excellent example of the three-part vertical block form made popular in the early 1920s. The hotel’s construction coincided with the height of the Permian Basin oil boom and the explosive growth in Big Spring’s population and economy.  Local ranchers W.R. and Lillian Settles constructed the hotel after the discovery of oil on their ranch made them very wealthy.

Though it continued to operate for nearly half a century, the hotel sat vacant and neglected for nearly three decades. Last year, however, Big Spring native G.Brint Ryan breathed new life into the hotel, completing an extensive rehabilitation project utilizing the Federal Historic Preservation Tax Incentives program. A grand re-opening in December 2012 once again introduced residents and guests alike to hotel’s original grandeur. The Settles Hotel is was listed in the National Register on April 18, 2013, under Criterion A in the area of Commerce and Criterion C in the area of Architecture, both at the local level of significance.