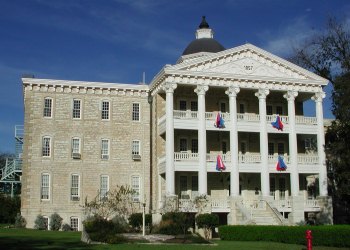 The Antiquities Advisory Board makes recommendations to the Texas Historical Commission on issues related to the Antiquities Code of Texas. The Board considers and discusses proposed State Antiquities Landmark nominations and permitting issues, including resolution of defaulted permits. The Board meets in conjunction with the THC’s Quarterly Meetings.

Rules for the Antiquities Advisory Board

The following is quoted from the Rules of Practice and Procedure for the Antiquities Code of Texas, Texas Administrative Code, Title 13, Chapter 26, Rule 26.5.

(1) Consider and discuss all proposed landmark nominations and any non-adjudicative issues or disputes specifically related to Antiquities Code of Texas and associated permitting issues that are brought before them by the commission, members of the board, or the public.

(2) Function as preliminary reviewers for the commission unless otherwise directed by the commission, or refused by a complainant(s).

(B) For the purpose of this chapter a conflict of interest would result if a vote by a member of the board is likely to result in a financial benefit or personal gain for any of the following individuals:

(i) the member of the board;

(ii) any person within the second degree of consanguinity or affinity to the person, which includes a spouse, sibling, parent, grandparent, child or grandchild, whether by blood or marriage;

(iii) a business partner of the member; or

(iv) any organization for profit in which the member, or any person of clauses (ii) and (iii) of this subparagraph, that is serving or is about to serve as an officer, director, trustee, partner, or employee. A financial benefit includes, but is not limited to, grant money, contract, subcontract, royalty, commission, contingency, brokerage fee, gratuity, favor, or any other things of real or potential pecuniary value.

(5) Pursuant to Texas Government Code, §2110.008, the board must be reauthorized by the commission every four years during the commission's first regularly scheduled quarterly meeting of that year.