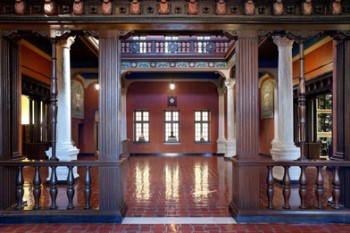 The City of Houston, in partnership with the nonprofit Julia Ideson Library Preservation Partners, completed major work in 2011 to the Julia Ideson Building, a Houston Public Library facility located in the heart of downtown Houston. Completed in 1926, the Ideson Building is an impressive three-story edifice clad in cream-colored brick. It has arched openings, cast stone window surrounds, decorative details in limestone and marbles, finials lining the parapet wall, ornamental metalwork, and a red Spanish tile roof. The interior features elaborate woodwork, marble columns, and murals by important women artists completed with funds from the Public Works of Art Project.

The building was named after the city's first librarian, Julia Bedford Ideson. Ideson was hired in 1903 and, under her direction, the library's collection and services expanded until their building was too small. Ideson and the library building committee worked to plan a new structure, which was to be a prototype in design for future public buildings in downtown Houston. They selected architect Ralph Adams Cram and his Boston firm, Cram and Ferguson, for the project. Cram worked with local architects William Ward Watkin and Louis A. Glover, coordinating also with the city's architect, W.A. Dowdy. 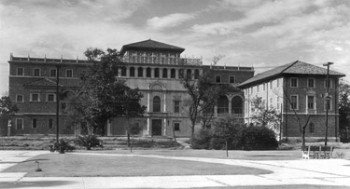 The Spanish Renaissance Revival style was chosen for the library and it was intended that future municipal structures were to be of the same architectural style. The new library building opened in 1926. With the crash of 1929 and the Great Depression, however, the Julia Ideson Building was the only structure completed in the style envisioned for downtown Houston.

The Ideson Building served as Houston’s main library until 1976, when the adjacent Jesse H. Jones building opened. At that time, the historic building was modified to house the newly-created Houston Metropolitan Research Center, a repository for photographs, maps, drawings, and other documents documenting Houston’s history. The Ideson Building remained well maintained by the City of Houston, but some incompatible alterations were made to accommodate the building’s new use. Six floors of storage were created through the center of the structure for archived materials, dropped ceilings were added in some of the rooms, and other modifications took place.

Looking to the Future While Respecting the Past

Over the years, the Houston Metropolitan Research Center’s archival collections outgrew the space available. The stacks were crowded, and more sophisticated climate/humidity control and appropriate storage facilities were necessary to house the repository’s archives. Acting on the initiative of then Mayor Bill White, the Julia Ideson Library Preservation Partners nonprofit organization was formed in 2006 and charged with raising funds for restoration work to the historic building and a new archival addition.

The Texas Historical Commission (THC) was contacted early in the design process. The Ideson Building is designated as a State Antiquities Landmark (SAL), a Recorded Texas Historic Landmark (RTHL), and listed in the National Register of Historic Places. Both the SAL and RTHL designations give legal protection to the building under state law and require that the owners consult with the THC prior to undertaking any work beyond routine maintenance. SAL designation is our state’s most stringent designation and requires that a Historic Structures permit be issued for proposed work. The project was also awarded a grant from the National Park Service through their Save America’s Treasures program; this use of federal funding required that work be reviewed by the THC under Section 106 of the National Historic Preservation Act and mandated that a preservation easement be placed on the building. The THC is structured so that one reviewer handles all architectural projects in his or her review region. In cases where THC has review authority under multiple designation types, the review process is handled concurrently by one staff member to ensure that there is no delay. 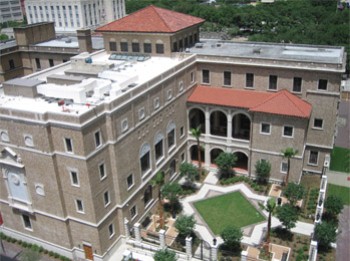 Phase I of the project included the addition of a 21,500-square-foot wing with an adjacent open-air loggia and reading garden. Both the new wing and the reading garden were originally designed by architect Ralph Adam Cram but were not included in the library as built due to a shortage of funds. THC staff worked with the architects to ensure that the new wing was designed in keeping with the Secretary of the Interior’s Standards for Rehabilitation. The Standards say that new construction should be differentiated from the old but compatible with the massing, size, scale, and architectural features to protect the historic integrity of the property. Essentially, the new construction should be different enough that it should not be mistaken for historic, so as to not create a false sense of historical development for the building. However, the design must also be compatible enough with the design of the historic architecture that it does not appear incongruous. This was accomplished at the Ideson Building by, among other things, simplifying the architectural details on the new construction and using a brick that was similar to but not an exact match for the historic building. The bulk of the archival collection was relocated to the new wing, which contains state-of-the-art, environmentally friendly archival storage with a reading room on the first floor, a collections vault on the second floor, and 2.5 floors of high-density storage. 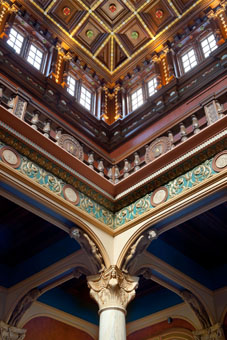 Phase II of the project included restoration to the exterior and interior of the original 66,000-square-foot historic building. Missing cast-stone pieces, such as roof finials, were replaced. All public spaces were restored to their original appearances, including the lobby, galleries, and reading rooms. The building’s intricately-painted coffered ceilings and murals (completed under the Works Progress Administration program) were carefully restored by professional conservators. New photo and book conservation labs were created. The library’s historic furniture was identified and approximately 95 percent was restored and re-installed in its original locations. All artwork given to the historic central library (and its predecessor Carnegie Library) from 1904 to 1944 was identified, located, restored, and in most cases, reinstalled. Hazardous materials were abated, the HVAC, electrical, and plumbing were upgraded, and a new elevator and roof were installed. The project is also expected to achieve Silver LEED rating through new energy-efficient HVAC and plumbing systems, as well as the use of rapidly-renewable local materials.