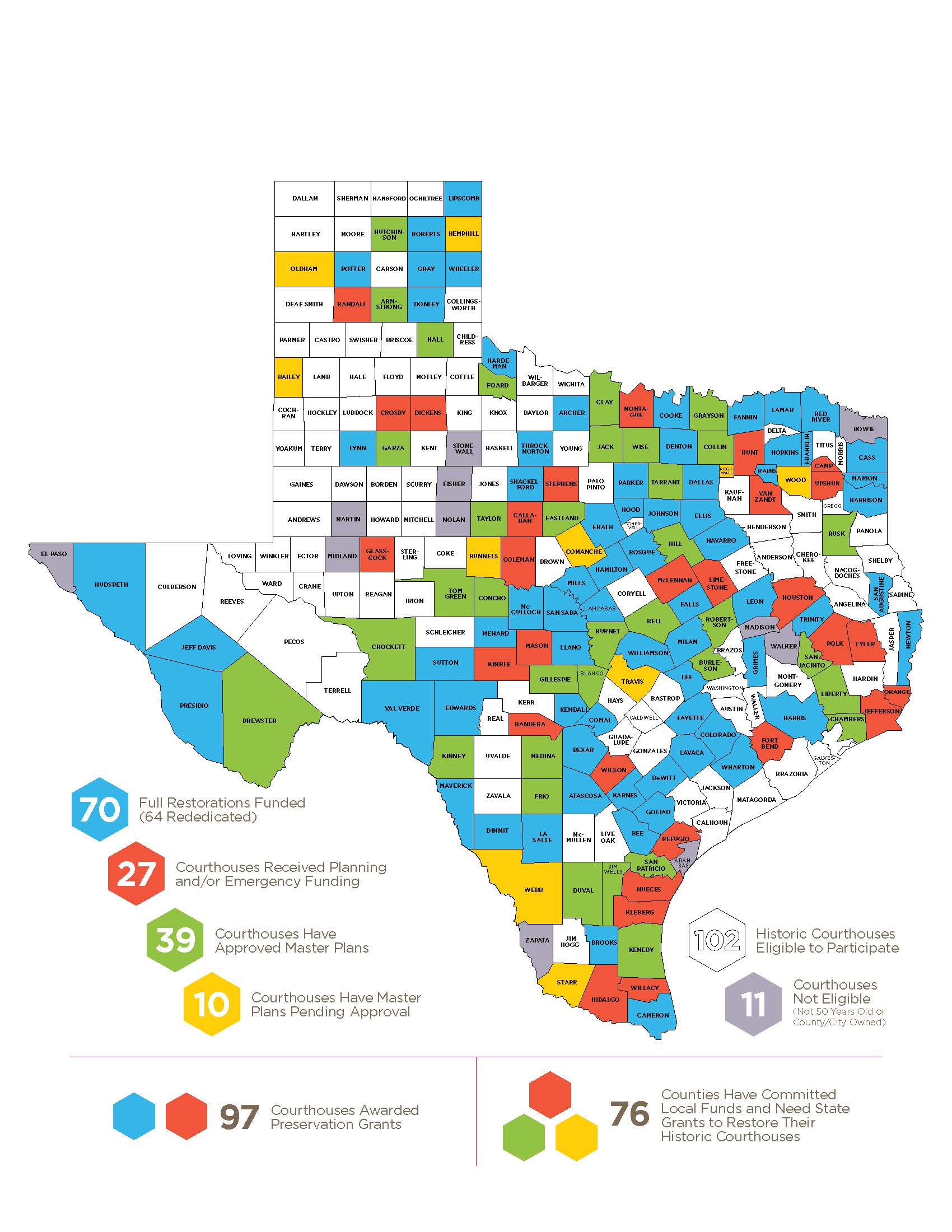 Texas has more historic courthouses than any other state. Today more than 240 courthouses still stand that are least 50 years old. About 80 were built before the turn of the 20th century. By the end of that century, most of these structures were significantly deteriorated due to inadequate maintenance, insensitive modifications or weather related damage. The Texas Historical Commission (THC) documented the condition of 50 of the state’s oldest courthouses in the late 1990s and determined that counties lacked the resources to preserve the buildings for future generations.

Providing assistance to counties reached a critical point when Texas county courthouses were added to the National Trust’s 11 Most Endangered Places list in 1998. The state’s response was to create the Texas Historic Courthouse Preservation Program (THCPP), the largest preservation grant program ever initiated by a state government. This nationally recognized preservation program has turned around the trend of disrepair and begun the process of restoring the state’s most treasured historic landmarks.

Established in June 1999 by the Texas Legislature and Gov. George W. Bush, through House Bill 1341, the THCPP provides partial matching grants to Texas counties for the restoration of their historic county courthouses, codified in Texas Government Code, Section 442.008-83 (PDF). The program typically awards the following types of grants: planning grants for the county to produce architectural plans and specifications; construction grants for the county to undertake construction of some kind; and emergency grants to address issues endangering a historic courthouse or its occupants. The program awards planning and construction grants based upon the sum of scores assigned to 20 criteria, and emergency grants based primarily upon the score assigned to the endangerment category.

The program began with a $50 million appropriation for the grants, which were awarded in two rounds in 2000 and 2001. Subsequently, the program's success led to continued funding from the Texas Legislature:

The THCPP has been recognized by the Texas Society of Architects and the National Trust for Historic Preservation with honor awards. In May 2008, the program received the Preserve America Presidential Award. Today, a total of 136 Texas courthouses are listed in the National Register of Historic Places, 145 are Recorded Texas Historic Landmarks, and 109 are State Archeological Landmarks, and as of 2018, 70 of those have been fully restored through THCPP grants and another 29 have received emergency or planning grants.

In 2012, Texas’ historic courthouses were again placed on the National Trust’s 11 Most Endangered Historic Places list, stressing the significant amount of work still left to do in order to save these threatened structures. Read more about historic courthouses in danger.

In support of the projects completed with state grant funds, the THC also created the Texas Courthouse Stewardship Program, which provides technical assistance and training to county staff on how to maintain their newly restored courthouse.

Read more about the Texas Historic Courthouse Preservation Program in the Handbook of Texas Online.