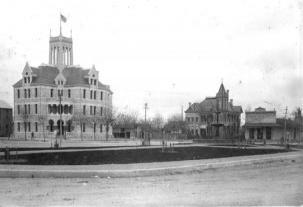 “The Courthouse guards the records of citizens past and present, literally from the cradle to the grave and everything in between.”
– Myra Lee Adams Goff, Herald-Zeitung

The Comal County Courthouse, designed by J. Riely Gordon in the Romanesque Revival style, was constructed in 1898 and dedicated in January 1899. Rather than being placed in the center of the town square, the courthouse was built on the northeast corner of the square. The interior spaces are arranged in a Greek-cross plan with a central stairwell as developed by Gordon to facilitate natural ventilation by allowing hot air to rise and vent through the tower, giving the tower the role of not only unifying the courthouse massing but also serving a functional purpose.

All of the spaces radiate from a central core containing an open stairwell that continues up into the stone tower atop the building. The two-story-high district courtroom on the second floor is expressed on the exterior by its curved walls. The exterior walls are of native limestone with a rusticated finish and complemented by cut-stone lintels and delicate stringcourse moldings. The dormers, incorporating carved engaged columns, add to the picturesque quality of the building and relieve the austerity of the roof forms. A dentil course provides a delicate accent at the cornice of the main walls as well as at the cornice of the tower.

Similar in design to many of Gordon's signature Texas courthouses, the Comal County Courthouse contains two, two-story, quarter-circular entrance galleries, which are set into the southeast and southwest re-entrant angles, and two, three-story, quarter-circular bays, which are set into the northeast and northwest re-entrant angles. The entrance porches are supported by polished Moorish-inspired columns of pink granite. Above the columns are capitals with handsomely carved Sullivanesque details. A brick parapet with punched brick details crowns each bay.

Additions constructed in 1930 and 1966 obscured the northeast and northwest entrance bays, prior to their removal as part of the recent full restoration. The original slate roofing of the structure has been replaced over the years with metal.