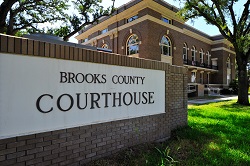 The Brooks County Courthouse cornerstone was laid in 1914. Designed by San Antonio architect Alfred Giles, the building was renovated in the 1980s, but by 1999 the courthouse needed major work.

The project was selected to receive a grant for development of the architectural plans in 2002 and received a construction grant award in 2006. Due to the construction of an annex that delayed the project’s start, it was the last Round IV project to be completed in 2010. State funding for the project totaled $3,165,255.

The building has been updated with a full sprinkler system, approximately 60 tons of air conditioning, a new electrical distribution system, new slate roof and flashing system matching the original, a new accessible elevator, new restrooms, balcony restoration, fire alarms, new audio/visual equipment, reproduction wood windows, and new wood doors to match the original. The courtroom was reduced in size and has now been returned to its original configuration with an open balcony.