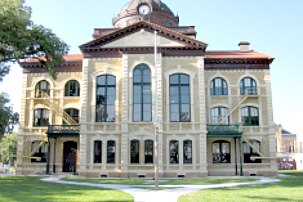 The Colorado County Courthouse was completed in 1891. Architect Eugene T. Heiner designed the building in the Renaissance Revival temple style.

The original design included a tall clock tower rising from the center of a hipped roof but a 1909 hurricane dispensed with the tower and damaged most of the roof. The resulting repairs modified the design with a more fashionable early 20th century Italian Renaissance Revival dome that continues to crown the courthouse today. The copper dome features alternating windows and festooned panels around the base and a glass skylight at the top. The dome underwent restoration work in 1953, and again in 1979, where the acoustic tile ceilings were removed and the glass repaired. The red tile roof, however, suffered considerable damage during a 1981 storm “of tornadic force”, which, despite repairs, may have been instrumental in the collapse of a large portion of the plaster ceiling above the District Courtroom in 2006, on a day in which court was supposed to be in session but, through fortunate coincidence, the trial on the docket had been rescheduled. An investigation revealed that water damage combined with improper attachment of the plaster lath to the wood framing had caused the structural failure.

A final restoration, completed in 2014 by way of the Texas Historic Courthouse Preservation Program, assisted in returning most of the details in the Colorado County courthouse to their 1910 iteration. The restored courthouse provides the epicenter of the Columbus town square where, together with the surrounding Victorian homes and period commercial buildings, visitors may admire one of the more prominent historic districts in the state. The courthouse rededication took place on May 17, 2014.