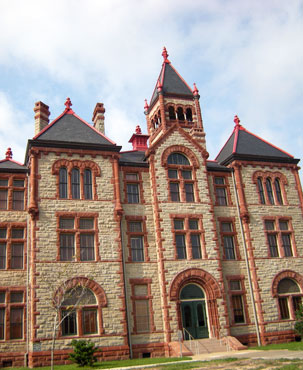 The 1896 DeWitt County Courthouse was designed in the Romanesque Revival style by noted architect Arthur O. Watson and completed under the supervision of Eugene T. Heiner.

By the 21st century, the courthouse's original slate roof had been replaced with one of Spanish tile. The 1950s interior alterations included original rich, Victorian details that had been mercilessly stripped or covered in turquoise tile, dropped ceilings, and a new floor level that had been inserted into the district courtroom.

This project began with the exterior and has progressed into a full restoration of the courthouse, inside and out. The district courtroom was reopened to its historic two-story height and its balcony was replicated. The building's long-missing iron stairs, with their decorative railings, were replicated as well, along with the elaborate woodwork lining the hallways and courtrooms.

The courthouse was rededicated in October 2007.