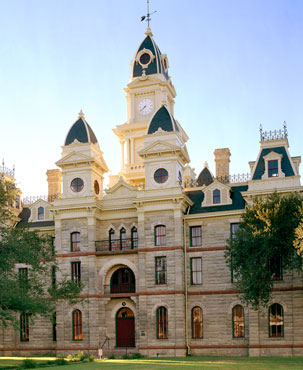 This 1894 Second Empire Style courthouse, designed by Henry E.M. Guidon, suffered the loss of its towers to a 1942 hurricane.

Over the years, the tinted cement tile floors were covered, and the interior was extensively altered.

The restoration of the courthouse included recreation of the towers, slate roof, and cresting. The historic cement tile floors were re-exposed and new replicated tiles were used in areas where the original floor was damaged beyond repair or missing. Suspended ceilings were removed to reveal painted metal vaulting. The district courtroom was fully restored to include a replicated pressed metal ceiling, balconies and furnishings.

Construction was completed in June 2004.