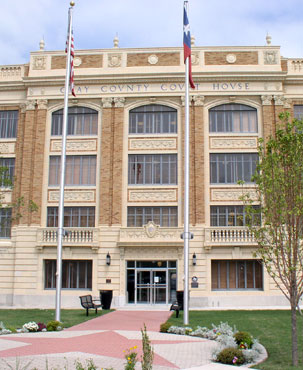 W.R. Kaufman designed the Beaux Arts style courthouse, completed in 1930. The construction of several governmental buildings in Pampa at the time marked a period of prosperity in the Texas Panhandle and was reminiscent of the City Beautiful movement of the early 20th century.

Because of its relatively young age, the courthouse had never had any major restoration or renovation work. The building had outdated wiring and environmental systems and a deteriorating exterior envelope.

The courthouse was rededicated in April 2003.